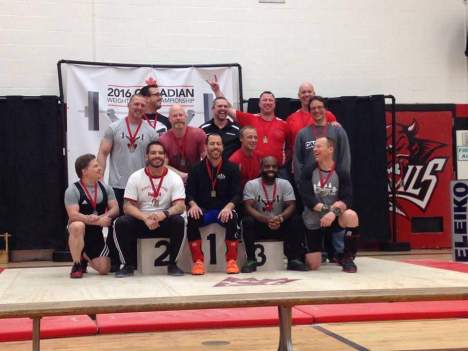 I competed recently at the 2016 Canadian Masters Nationals, and is a little story describing the experience. The only negative (and this might be something unique to me!) was the night before. As I lay awake staring at a typically bland hotel room ceiling, I couldn’t help but dwell on every possible negative thought. First was the preparation – did I train hard enough, or maybe too hard? What about my diet or recovery, where did I screw that up? What could I have done better? What was I going to eat tomorrow, and would it support performance? These thoughts and more continually cycled through my brain as I absently mindedly channel surfed for a few hours. I then checked out the AGM (which itself is a story for another day!) before calling it a night.

My session was to begin at 3:30 Saturday, which left me the whole day to basically do nothing. I headed to Denny’s for a massive greasy breakfast, planning it so that I had 6 hours to digest and process the whatever-it- was that I ate. My plan was to then eat an energy bar or two about 2 hours before competition, and to make sure that I drank water and Gatorade like it was going out of style. Nutrition: check!

After breakfast I went down to the venue to watch the first sessions. I figured I’d see some people who were older than me come out and lift some weights, get some applause, maybe pick up some hardware. But it was a bit more intense than that. No matter what their age or the numbers that they were putting up, these people were fiercely competing! Not so much against each other, but definitely against themselves. The impression that I got was that these athletes were there for the love of the sport and to challenge their limits, not simply to beat each other. Each competitor gave their best, regardless of their chances of winning gold. It was very inspiring!

Eventually it was time to begin warming up. Within short order most of the competitors in my session had introduced themselves to me, but once the bars started moving this was as serious a group as I have ever seen. Their warm-ups were dialled in and they were focused on the task at hand. Although we were all Masters athletes, we were preparing to compete as if we were all 20. There was no doubt that everyone was going to leave it all on the platform.

My snatch warm up went fairly well, with only one miss at 90. I had planned to open at 105 to try to save my injured left knee for the clean & jerks, but I hit a solid 105 in the warm up and followed it up with a solid 110. My main competition was opening at 105, and I suspected that he would have a bigger jerk than I would so I knew that I needed to at least keep pace with him in the snatch. He opened at 105 and made it, so I opened at 110 and was good. His second at 113 was successful, so I hit 115 for my second. He then made 120 for his third, and I went for a PR of 121. It was a good attempt and I caught it securely, only to suffer one of those slow motion misses behind that we`ve all experienced. You sit in the squat for what seems like an eternity, knowing that the bar is going backwards the second you try to stand up. And when it did, my left knee suddenly felt like someone smoked it with a crowbar Nancy Kerrigan-style. So with a 5kg deficit and an aggravated injury, my shot at gold was essentially gone.

Without a break between lifts, we had to immediately begin warming up for the clean & jerk. I tried some lunge presses with an empty bar, but could not recover from the lunge. I also tried some empty bar front squats, but could not recover those as well. With the symptoms pointing to a possible sprain of my lateral collateral ligament, squatting was out of the question. My only option would be a power clean and power jerk, since if I squatted with any amount of weight I would likely collapse into a blob of goo on the platform. The warm up was rough, and I started missing power jerks at 110. I had declared 125 to open, and I was able to drop that down to 120. My hope now was to make just one jerk and total.

I took the platform, with more than one audience member no doubt wondering “didn’t he just attempt to snatch more than this?” The power clean was not too difficult, and I managed to power jerk it. I gave the self-congratulatory fist pump as I hobbled off the stage, but I saw one red light out of the corner of my eye. No matter, with that lift I had totaled and locked down the silver medal, and could now go nurse my body and ego! But as I passed the official’s table, instead of declining my last two attempts I found myself saying “125 please.”

I didn’t come all this way to decline! If it killed me, I was taking another lift. So I power cleaned 125, and managed another passable power jerk (only the second time that I’ve power jerked 125). Again, I got a red light! But now my knee was on fire and I walked stiff legged off the platform. But I gave it that extra effort and could sleep knowing that I didn’t suck out. I could decline my third attempt and go find some ice and maybe a pillow to cry on. But as I passed the Official’s table again, instead of declining my third attempt I again found myself saying “130 please.”

As I sat waiting for my name to be called, I couldn’t cross my leg. I needed both hands just to move it through its range of motion. People were starting to awkwardly ask if I needed anything. “Excuse me, but do you need some water? Because you look like you’re about to die.” But I declined, instead closing my eyes and trying to put the pain away until later.

When I took the stage I couldn’t squat to get into my pulling position. It took 30 seconds to get ready. Then I cleaned the 130, trying not to cry like a bitch as I stood it up. My entire body was screaming “drop the weight!” but I just focused on my one jerk cue: 2 second dip, then explode!

So I ended up going 5/6 and hitting a big power jerk PR. But what was the point, you might ask. Once you locked down silver with your first clean & jerk, why continue despite an injury? If there was no chance of improving your position or hitting PR numbers, why bother?

This is the truth about competition, which was evident in every session that I watched at these nationals. It doesn’t matter if you can win or not, or if you can PR. All that matters is that you give it 100% and leave it on the platform. Competition for the sake of competition, for the love of the sport. Yes I took home silver and I’m proud of it, but not because I did the minimum required to get it. I gave 100% of what I could have that day. It wasn’t my best competition in terms of numbers (I’ve put up higher), but in terms of heart and drive I’ve never done better. I couldn’t quit because none of these other athletes were letting themselves quit! And I also made friends here which I’ll see again next year, like minded individuals with the same passion for this sport which I have.

So this was my experience at the nationals. Was it worth all the prep work and travel and boo-boos? Absolutely! And as soon as all the pain goes away, then it’s back to square one. The next competition is just around the corner.